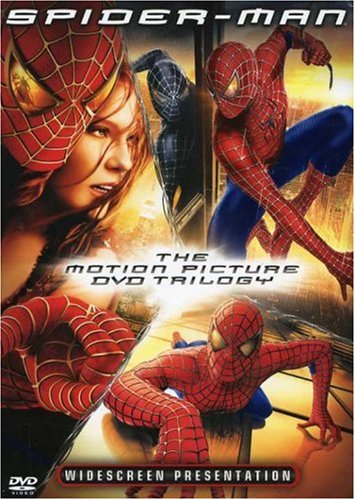 Spider-Man 3
How does Spider-Man 3 follow on the heels of its predecessor, which was widely considered the best superhero movie ever? For starters, you pick up the loose threads from that movie, then add some key elements of the Spidey comic-book mythos (including fan-favorite villain Venom), the black costume, and the characters of Gwen Stacy and her police-captain father. In the beginning, things have never looked better for Peter Parker (Tobey Maguire): He's doing well in school; his alter ego, Spider-Man, is loved and respected around New York City. And his girlfriend, Mary Jane Watson (Kirsten Dunst), has just taken a starring role in a Broadway musical. But nothing good can last for Spidey. Mary Jane's career quickly goes downhill; she's bothered by Peter's attractive new classmate, Gwen Stacy (Bryce Dallas Howard); and the new Daily Bugle photographer, Eddie Brock (Topher Grace), is trying to steal his thunder. Enter a new villain, the Sandman (Thomas Haden Church), who can transform his body into various forms and shapes of sand and who may be connected to Peter's past in an unexpected way. There's also the son of an old villain, Harry Osborne (James Franco), who unmasked Spidey in the previous movie and still has revenge on his mind. And a new black costume seems to boost Spidey's powers, but transforms mild-mannered Peter into a mean and obnoxious boor (Maguire has some fun here).

If that sounds like a lot to pack into one 140-minute movie, it is. While director Sam Raimi keeps things flowing, assisted on the screenplay by his brother Ivan and Alvin Sargent, there's a little too much going on, and it's inevitable that one of the villains (there are three or four, depending on how you count) gets significantly short-changed. Still, the cast is excellent, the effects are fantastic, and the action is fast and furious. Even if Spider-Man 3 isn't the match of Spider-Man 2, it's a worthy addition to the megamillion-dollar franchise. --David Horiuchi

Spider-Man 2
More than a few critics hailed Spider-Man 2 as "the best superhero movie ever," and there's no compelling reason to argue--thanks to a bigger budget, better special effects, and a dynamic, character-driven plot, it's a notch above Spider-Man in terms of emotional depth and rich comic-book sensibility. Ordinary People Oscar-winner Alvin Sargent received screenplay credit, and celebrated author and comic-book expert Michael Chabon worked on the story, but it's director Sam Raimi's affinity for the material that brings Spidey 2 to vivid life. When a fusion experiment goes terribly wrong, a brilliant physicist (Alfred Molina) is turned into Spidey's newest nemesis, the deranged, mechanically tentacled "Doctor Octopus," obsessed with completing his experiment and killing Spider-Man (Tobey Maguire) in the process. Even more compelling is Peter Parker's urgent dilemma: continue his burdensome, lonely life of crime-fighting as Spider-Man, or pursue love and happiness with Mary Jane Watson (Kirsten Dunst)? Molina's outstanding as a tragic villain controlled by his own invention, and the action sequences are nothing less than breathtaking, but the real success of Spider-Man 2 is its sense of priorities. With all of Hollywood's biggest and best toys at his disposal, Raimi and his writers stay true to the Marvel mythology, honoring Spider-Man creators Stan Lee and Steve Ditko, and setting the bar impressively high for the challenge of Spider-Man 31. --Jeff Shannon

The first commentary track is by director Sam Raimi and a self-deprecating Tobey Maguire speaking in tandem, and producer (and Marvel CEO) Avi Arad and coproducer Grant Curtis speaking in tandem. They discuss a number of topics, including Raimi's memory of his excitement over Richard Donner's Superman and how the character of Black Cat had to be dropped from the film. The second commentary is by six members of the Oscar-nominated effects team, and one of their primary focuses is how Doc Ock's arms were achieved by a combination of puppetry and CGI.

The centerpiece of the second disc is a massive two-hour documentary that can be viewed all at once or in 12 separate pieces. It covers the development of the story, the visual effects, costumes, stunts, and sound and music. Three shorter featurettes cover Peter Parker's struggle between his personal and hero lives, Doc Ock, and the women in Spider-Man's life, and what's interesting is how they discuss those topics not just in relation to the movies but to the comic books as well. (For example, Betty Brant and Gwen Stacy had a much greater impact in the comics.) There's a scene in which you can toggle among three different camera angles, and a gallery of 17 paintings Alex Ross created for the opening sequence. The sound and picture are spectacular, though only the Superbit edition has DTS. --David Horiuchi

For devoted fans and nonfans alike, Spider-Man offers nothing less--and nothing more--than what you'd expect from a superhero blockbuster. Having proven his comic-book savvy with the original Darkman, director Sam Raimi brings ample energy and enthusiasm to Spidey's origin story, nicely establishing high-school nebbish Peter Parker (Tobey Maguire) as a brainy outcast who reacts with appropriate euphoria--and well-tempered maturity--when a "super-spider" bite transforms him into the amazingly agile, web-shooting Spider-Man. That's all well and good, and so is Kirsten Dunst as Parker's girl-next-door sweetheart. Where Spider-Man falls short is in its hyperactive CGI action sequences, which play like a video game instead of the gravity-defying exploits of a flesh-and-blood superhero. Willem Dafoe is perfectly cast as Spidey's schizoid nemesis, the Green Goblin, and the movie's a lot of fun overall. It's no match for Superman and Batman in bringing a beloved character to the screen, but it places a respectable third. --Jeff Shannon

A.J. Allmendinger, a part-time driver in the NASCAR Cup Series, ended up as the shocking winner of the chaotic inaugural race on the Indy Road Course.

Mercedes appears set to quit Formula E and is expected to officially communicate its exit decision in the coming days, Motorsport.com understands.

Spa-Francorchamps circuit director Nathalie Maillet has died aged 51, in what has been reported as a double murder-suicide.

The curbing in Turns 5/6 at Indianapolis came up, causing a bizarre incident with five laps remaining in the inaugural NASCAR Cup Series race on the IMS road course.

The JW Automotive Engineering team won twice at the Le Mans 24 Hours with ageing Fords and was considered the heavy favourite to add more victories to its tally after partnering with Porsche. But despite being armed with the all-conquering 917, this formidable combination was never as successful in real life as on the big screen.

Having twice missed out on Formula 1 and reinvented himself as a touring car driver, Jose Maria Lopez has had a rocky ride to becoming a four-time world champion. One more would put him level with his nation's favourite son, but there's another prize he would value far more than the honour of matching Juan Manuel Fangio's tally.

It’s fashionable among teams to knock the products offered by Formula 1’s sole tyre supplier, especially after the failures earlier in the season. But, as Pat Symonds explains, there are a number of unscientific myths behind these complaints against Pirelli.

McLaren Formula 1 driver Lando Norris believes his CEO Zak Brown and team boss Andreas Seidl have played a "hugely important' role is his development over the past two and a half years.

Glickenhaus topped the pre-event test day for next week's Le Mans 24 Hours after a late run from Olivier Pla put the #708 car ahead of both Toyotas.

Jake Dennis says a “weird sound” preceded the rear-axle lock-up that caused the rookie to crash out of the 2021 Berlin E-Prix while he was fighting for the championship title.

A bizarre inaugural NASCAR Cup race on the Indy Road Course ended with Denny Hamlin looking for his first win of the season and Chase Briscoe looking for the first of his career.

A.J. Allmendinger, a part-time driver in the NASCAR Cup Series, ended up as the shocking winner of the chaotic inaugural race on the Indy Road Course.

The curbing in Turns 5/6 at Indianapolis came up, causing a bizarre incident with five laps remaining in the inaugural NASCAR Cup Series race on the IMS road course.

Glickenhaus topped the official test day ahead of next week's Le Mans 24 Hours, with Olivier Pla outpacing both Toyotas in the #708-Pipo Hypercar. Here's a selection of images from the test.

Tom Ingram put in a beautifully judged drive from fourth on the grid to take victory in the reversed-grid finale to the British Touring Car Championship round at Knockhill.

Mitch Evans “hurts in every aspect emotionally” after his 2021 Berlin E-Prix startline glitch sparked a heavy shunt and eliminated him from the Formula E title race.

Yamaha’s Fabio Quartararo admits the wet latter stages of Sunday’s MotoGP Austrian Grand Prix were “the first time this year that I was thinking a little bit about the championship”.

Marquez had to take painkiller injections ahead of Austrian MotoGP

Honda’s Marc Marquez revealed he had to take some painkilling injections prior to the MotoGP Austrian Grand Prix owing to pain in his recovering right arm.

Ash Sutton won a thrilling battle with Colin Turkington in the second British Touring Car Championship race of the day at Knockhill.

Thierry Neuville has revealed Le Mans 24 Hours legend Jacky Ickx was sending him messages of support on his way to securing a drought-ending World Rally Championship victory in Belgium.

Venturi’s Norman Nato won the final round of the 2020-21 Formula E World Championship at Berlin’s Tempelhof Airport, as Mercedes’ Nyck de Vries was crowned champion after the majority of his title rivals crashed out.

Spa-Francorchamps circuit director Nathalie Maillet has died aged 51, in what has been reported as a double murder-suicide.

William Byron laid down a blisteringly flying lap to win the pole for the inaugural NASCAR Cup Series race on the Indy Road Course.

The final round of the 2021 Formula E season at Berlin has been red-flagged following a major startline crash involving title contenders Mitch Evans and Edoardo Mortara.

Having tasted drivers' and constructors' success in 1962, the BRM Formula 1 team had fallen on hard times by the end of the decade. But the arrival of fresh faces and new cars gave it one more boost as the 1970s began.

The new car that can resurrect Ford's WRC winning pedigree

M-Sport has become the first to unveil its new-for-2022 hybrid World Rally Championship challenger, the Puma Rally1. Ford has upped its support in a bid for glory, but can the new machine roll back the years and return the Blue Oval to the top of the WRC tree?

As Formula 1's push to bring costs down is limiting how much teams can use their state-of-the-art windtunnel facilities, the advancement in simulation technology and its limitless possibilities could soon be the determining factor in a team's success

Why Le Mans' hidden gem will produce its most unpredictable race

OPINION: Much attention in the build-up to the Le Mans 24 Hours is naturally devoted to the battle for outright honours. But the slim field in the Hypercar class as it gets established means the best battle will likely be found in an often-ignored division

Tony Stewart to Chase Briscoe: ‘I’m just glad you stood up for yourself’

Hamlin frustrated after contact with Briscoe: ‘Lack of awareness’

Chase Briscoe on contact with Denny Hamlin: ‘I’d be upset too’